In working through my Linux/Raspberry Pi eBook(Yes – the second eBook!), I’m up to the chapter where sounds are introduced using the SDL_mixer library. And I’ve hit two sets of problems.

It sometimes refuses to initialize the sound code.  This code below hits the LogError line:

The other day it was working but not today. Now I have updated the Pi’s code (sudo apt update etc) but I wouldn’t have expected that to break it. I’ve been looking on the internet and find the whole thing a bit complicated.

I’ve got my Pi running 64-bit Raspberry Pi OS. I’ve changed the output device to headphones which plug into the headphone socket. If I run the VLC media player and tell it to play into the headphones, it will happily play the .wav files I’ve got for the asteroids game.

But if I run speaker-test, a terminal application with this command line

By running this command:

and the speaker-test command using the device parameter –Dhw:Headphones now worked. I’ve highlighted the bits in the aplay output needed to identify the device.

The new command  is

I can now hear a female voice saying front left then front right a few times in my headphones.

So my Pi’s sound device is working; I just have to figure why SDL_mixer isn’t always. I’ll keep looking.

And the second problem which only occurs when the mixer is working, is when you play a lot of sounds. The PlayASound() function checks the result. On Windows it never had a problem but on Raspberry Pi, when you blow up a lot of asteroids say at one time, it plays a number of explosions then returns an error for each explosion after that. I think there’s only so many channels; that’s an easy fix; just ignore the error and return as if it succeeded.

A reader asked me how to setup SDL2 for Windows given recent changes in SDL2. Specifically the files and libsdl projects have been moved from the libsdl.org website to GitHub. You can easily find SDL2 Image, Mixer, TTF etc.

However it can still be quite daunting setting up Visual Studio for SDL2. You have to download the specific files, then configure the project properties to specify the include paths for header files and then the lib files, both the path to them and identify the ones you want to use.

As I’m on my new PC, I bit the bullet and went through the process of setting it up. It took just over an hour to configure it.  I’ve put it into a PDF that’s a couple of pages long.

So the game works but only after I disabled the sound code; it was failing in the call to Mix_OpenAudio(). I think recent work on the SDL Mixer needs some work on my part. I need to sit down and look at the SDL Mixer page and figure out what’s failing. Once that’s done, I’ll update the files.

My 2nd eBook is going to be a bit like the first one- first it teaches C but it is oriented towards Raspberry Pis.  Then it shows how to program Asteroids (like the first book) followed by a Match three game and finally a Rogue type dungeon explorer game. 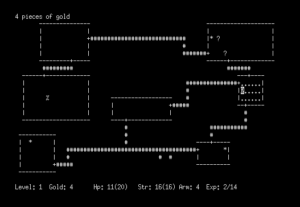 Now some rogue-likes stay true to the originals which were text based. Like this above from an article on Wikipedia. Now that’s ok, but I fancy something a bit more colourful so I’m going to use 16 x 16 pixel graphics.

I did a bit of searching and found these dungeon graphics on itch.io. I’ll use those to start with but may change. The view is not quite top down but top down with a bit of isometric in it. It looks better than pure top down.

So I figure the game has to have these elements.

(1) Generate a dungeon with multiple rooms and levels and stairs between,

(2) Fill the dungeon with monsters and treasures.

(3) Move the player’s character through the dungeon fighting monsters, picking up things including keys and maintaining a small inventory.

(4) Add some side quests like needing to find keys to open a chest with a magical item.

Do monsters move- you’d hope so. How are rooms connected, in fact how are dungeons generated? I created a dungeon generator for the postal game Quest 30 years ago and can remember how I did it so there’ll will be that to implement in C.

I’m also going to leave out things like needing food and water.

So there it is now. Now to start writing the software. I’ll update this with progress reports. 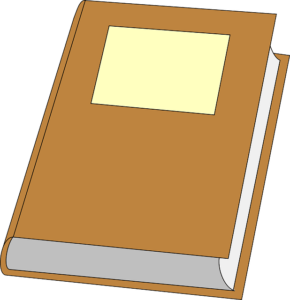 Brian Hall (aka Beej) has written or collected guides to several programming languages including one on C. Out of curiosity I pasted the one document HTML version into both Word and a text editor to get a feel for how big it is and it filled 416 pages on Word, almost 13,700 lines in a text editor.

It is quite comprehensive covering most aspects of C. He has a disclaimer that its a work in practice and there may be bits that need correcting but still, if you are looking for an excellent guide to C, I’d definitely recommend it and if you like it, send him a tip on Paypal. 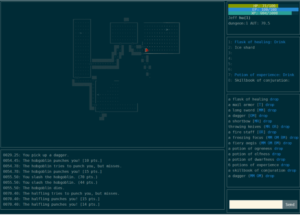 I believe that the Raspberry PI, especially the 4B is a great and very low cost machine for not only running games but for developing them as well. Of course, if you have a PC, Linux or Mac then you can use that as a development machine but if you haven’t, it costs less than £100 (when you count the system, case, cables, SD-Card) to get up and running.

So I’m reworking my original eBook for the Raspberry Pi, using software running on the Pi and developing a 2nd ebook. Along the way I’ll publish longer excerpts from it here. Probably one a week. 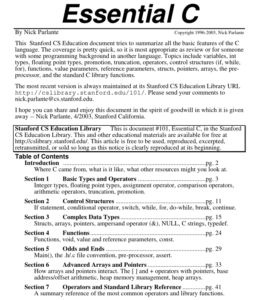 This was compiled between 1996 and 2003 by Nick Parlante at Stanford college. It’s a 45 page PDF that summaries all the basic features of C.

It saves having to search online or through a reference book (I have the excellent O’Reilly C book as well). It has a few pitfalls to show you things to avoid and lots of short source examples. 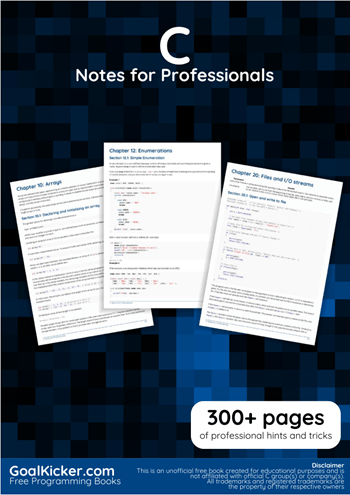 This has nothing to do with my ebook and was produced entirely by the Goalkicker.com project which produces free and very professional looking ebooks, I came across it just a few days ago.

The C Programming Note for Professionals is currently 327 pages long, a 2.4 MB download. It’s nicely laid out and professionally done. I’ve only flicked through it but it looks an excellent piece of work with 63 chapters currently. You can leave your email address and they’ll notify you of any changes.

There are almost 50 ebooks in total covering topics like Android, .NET, Xamarion Forms, Perl, PHP, MySQL, PostgreSQL and may other topics. This is an excellent library.  I don’t know who is behind this project but they deserve to be bought a lot of coffees…

This time it’s about Learning to program games in C on the Raspberry Pi. Most of the books I’ve seen are about programming in Python, but C combined with SDL2 gives you an edge. I already know that I can get 150 frames per second in Asteroids on a Raspberry Pi 4B.

The three games for the book are

The third game is one I originally wrote thirty-three years ago (Dark Empire) in Z80 assembler for the Zx Spectrum. I then converted all 5000 lines of code into CBM-64 6502 assembly in one month working seven all-nighters, with the last three on three successive days. That one wasn’t in hexagons but squares and of course there was no mouse.

On the morning after the last all-nighter I drove across Manchester to deliver the tape master copy to a railway station to be sent to the publisher in London and when I got home, I slept for 24 hours solid. I doubt I could do an all-nighter now, but 33 years ago …

I’ve managed one blog entry per day for the last 134 days but a change in side project (I was writing a book to be published, not an Ebook)  but that has to be delayed by at least a year because of an issue at the publisher. In fact I may just publish what I’ve done as my 2nd Ebook.

I’m currently working on networking on a Raspberry Pi. Unfortunately it has to be in C# not C. Networking is a lot easier in C#- you have OOP, task parallel library (far easier than threads), thread pools,. concurrency with async/await and a lot more.  And I can use C# with .NET core or Mono on the Pi.

That said, I will still continue on with game development on the PI. I’ve got my Match Three game half done; I’m quite proud of it and want to get it finished. But I may switch to a slightly less frequent blog posting schedule…