Wargames have long used hexagons. Compared to squares they are fairer. In a square if you move vertically or horizontally you move 1 unit, but if you move diagonally you move 1.414… units (the square root of two). With hexagons you move the same in every one of the six possible directions.

That does make hexagons a bit fiddly to use. For a start there are two orientations. Horizontal edge and vertical edge as shown here. Which you use is mostly a question of taste but for our example we’ll use a vertical hexagon.

Surprisingly mapping hex grids isn’t that difficult. Think of bricks in a brick wall.   You normally stack them like this:

If you look at the central brick (in bold) it is surrounded by six bricks just like a hexagon.

You could build a brick wall (very badly) like this where the bricks line up:

Where the bold brick is surrounded by eight bricks.

So we can use a two-dimension array to hold hexagons except we lose two locations on odd rows and two different locations on even rows. In terms of the 3 x 3 cells, it looks like this

For the game we’ll need the following hexagons all with a thin black border. If you want to make the game more interesting code this as a separate mostly transparent hexagon and have it as an option when drawing the map.

You might notice there is one extra hexagon, a dark blue with no border. That’s for the sea around the island where Onslaught takes place.

These are loaded into the game with the LoadTextures() call. It loops through a list of files. I’ve put these in as assets folder and have an array of c-strings giving the path and name of each file.

This is what the map looks like. Actually I think the salmon and orange are a little too near so I’ll probably change one of them, perhaps to green. 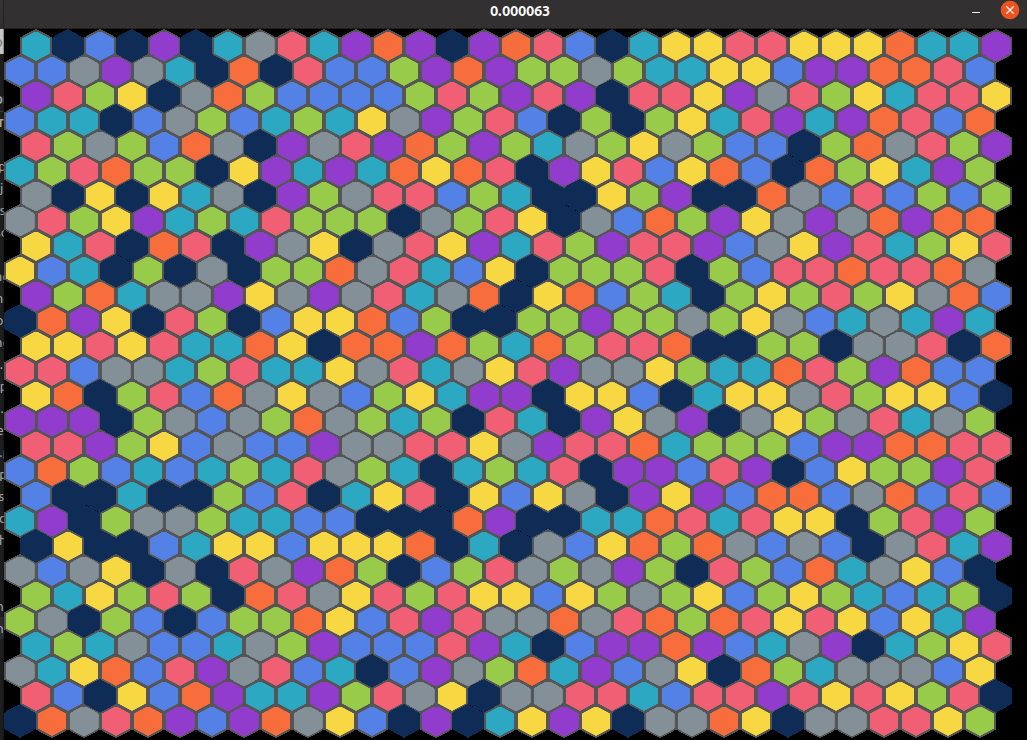 Architecture of the program

The source files from this tutorial are on GitHub in the file onslaught1.zip.

Starting with main on line 198, this starts by calling InitSetup() to switch into SDL, set the caption and load the graphics into a textures array. Each hexagon colour has its own texture. A texture is an SDL data structure in VRAM.  InitSetup() calls srand() with the time() function to generate a new map each time. Uncomment srand(0) on the line below to have the same map; this can be useful for debugging.

Next InitMap() is called to initialise the map.

This sets every location on the map to a number in the range 0-NUMTEXTURES-1.

Next is the GameLoop() function. This sits in a loop and calls DrawHexagons() and then looks to see if any keys are pressed. Press escape to exit. Press n to generate a new map.

DrawHexagons calls a double loop to draw each hexagon. This toggles the variable alt between 1 and 0 on successive rows. This is key to drawing hexagons in the correct place. The function DrawHex(int c, int atx, int aty, int alt) does all the donkey work.  It just blits the specified texture on the screen at the specified coordinates.

DrawHexagons also times the operation and puts it in the caption bar. It uses an external library hr_time to do this calling startTimer and stopTimer. The sources for hr_time/h/.c are included in the zip file.

I developed this on Ubuntu with Visual Studio Code and clang. Included in the zip file is the tasks.json and three other .json files in a .vscode folder.  This is tasks.json below. If your version of clang is a different one, you may need to alter the command. Just changing it to clang might work as both clang and clang-10 commands work from the terminal for me. .

The main program for this is just over 200 lines long, not too bad. When I run this on my hyper-V Ubuntu I get times of about 65 microseconds to draw the entire map which is not bad.