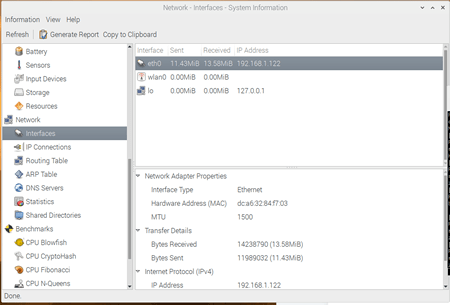 I played with a couple of free packages today. I can recommend hardinfo. (sudo apt install hardinfo to install then hardinfo to run ) though less about the benchmarks than the information it gives on your system.

I’ve got both 32-bit Raspbian and 64-bit Raspberry Pi OS on two sd cards and intend to run both and compare benchmarks just to see the difference.

Another benchmark utility that looks interesting is sysbench (sudo apt install sysbench to install). It runs from the terminal and lets you run benchmarks against file io, cpu, memory threads, mutex and oltp.  Just type sysbench and you’ll get a list of commands. 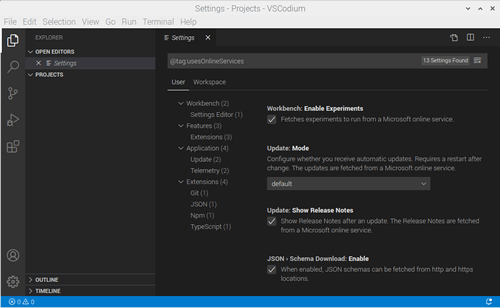 It was very easy.  This was onto my Pi 4 running 64-bit Raspberry Pi OS.

When you click on the link it will download and ask if you want to keep it. It will then give you the option of opening it and select the archiver. That will install it for you.

After that, to run it from the command line just type codium.

Or as I just discovered. Look on the pull down menu, go onto accessories and you should see (probably near the bottom) VSCodium. Move the mouse over and right-click.You’ll see a popup menu with Add to Desktop and Properties. If you click the former, you get an icon on your desktop.

Screenshots were captured with the Flameshot utility. It’s installed with sudo apt install flameshot. That’s the VSCodium and Flameshot icons.

So after deciding I was going to wait until the 64-bit Pi OS was tested and ready for use, I changed my mind and downloaded the beta and installed it.

It ran ok, though as with any Beta there are bound to be little glitches. There’s a survey where they are interested in what the PI is being used for and it showed UNDEFINED for my Pi’s serial number, though

worked fine and displayed it.

My main reason for trying it out though, I was curious about development tools, particularly IDES. I had forgotten that code.headmelted.com, the alternative source for Visual Studio Code (my favourite) supported arm64 which is what the 64-bit runs.  I was able to install VS Code from there without any problems.

32-bit has the memory limitation of 3 GB (in both Windows and Linux)  whereas 64-bit offers any amount of RAM up to what’s available. It’s not that big  thing with a 4 GB PI but with 8 GB it can make a big difference.  This article (Sorry that the link is to an article on Medium.com which offers a few free articles then paid) suggests that 64-bit Debian (which Raspberry Pi OS is) is quite a bit faster than 32-bit.  My impression is that it feels a bit snappier but that could be wishful thinking n my part!

I’ll put Asteroids on and see what fps I can get though that may not be a great way to compare them as the GPU plays a big part and I can’t see it making any difference, but I could be completely wrong on that. More as I investigate further.

I won’t be buying one for the moment but I mention it for another reason. 4 GB is the maximum RAM that a 32-bit OS can use, and on the PI like on Windows it’s actually 3 GB. To be fair you can have two processes each with 3 GB on the 8 GB Pi.

The announcement did mention that a beta 64-bit Raspbian OS is available for download and it’s here. This article shows that the 64-bit Os they tested is faster on the Pi than 32-bit.  This link to the DietPi forum tells you how to boot dietpi into 64-bit.

It’s to be hoped that 64-bit ARM development software will become available. Clang and gcc should be but I’m thinking of the code.headmelted.com version of Visual Studio Code.

As always if you are buying a Raspberry Pi 4B, I strongly suggest you get a case with a fan. They are not expensive and do make a difference. Despite running the Asteroids game, which is pretty intense, I have never got my 4B temperature above 51C. THat said I’ve ordered a touchscreen with a case for a 4B on the back and it doesn’t seem to take a fan. So it will be interesting to see what its like fanless. More on that when the touchscreen arrives.