When I first started with VS Code on Linux, I found the C/C++ configuration somewhat confusing.  I blundered through, wasted a bit of time and got there in the end. After a gap of a couple of years I did the same again recently on Raspberry Pi. It’s clearer in my mind now so I thought I’d explain it here. This works for Ubuntu, Raspberry Pi OS and should for most other Linuxes. (Not that I’ve tried them all…)

We’ll start with you having already installed Clang (or GCC) and VS Code, and the C/C++ extension for VS Code (shown above). So make sure those are all done.

Start by defining a Folder for VS Code. VS code doesn’t use projects but it manages everything relative to the currently defined Folder.  It’ll ask you to open a folder initially. That’s where your source code etc will go. I created a folder called examples under my home folder and used that.

To compile anything C/C++ you also need two json files. These files are

They are held in a hidden folder called .vscode in your current folder. Press F1 and you’ll see a popup menu. Type in C/C++ and you’ll see all the C/C++ items. Select C/C++: Edit Configurations (JSON). It’s highlighted below. 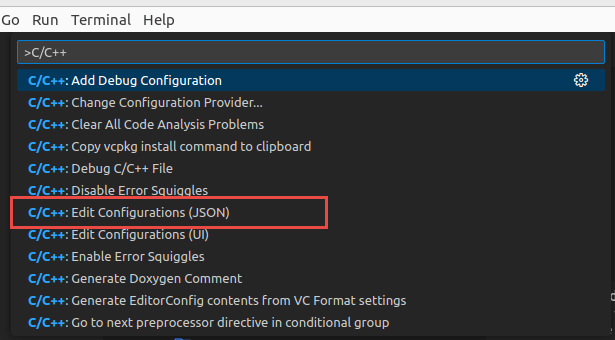 Now if you click that, and look in the folder examples you’ll see nothing but if you know how to view hidden files using the files utility (as shown below). Then you’ll see the folder .vscode.  On Raspberry Pi the file explorer always shows hidden files. 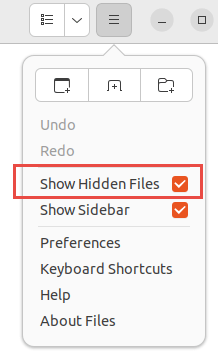 Now look in that folder and you’ll see c_cpp_properties.json.

Next we want tasks.json. On the Terminal menu, click the bottom item which is Configure Default Build Task

It’ll ask you to select the clang  build active task so click that and voila you now have tasks.json open in the editor. 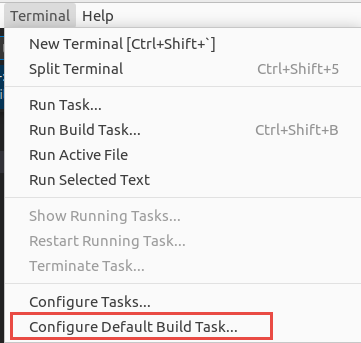 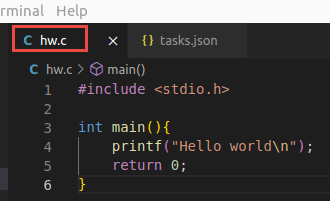 So what are the json files for?

The c_cpp_properties.json lets you specify include file paths.  For instance if you have the SDL files installed, the include files are in /usr/include/SDL2

Note you can install SDL on linux by following these instructions.

The tasks.json file lets you specify which files are to be included and also linked.

The -g option includes files. The ${file} is the current opened file and {workspaceFolder{} specifies the current folder where the file hr_time.c (used for timing). The -l is for linking files and links SDL2, SDL2_image and SDL2_mixer.  The last -lm links math(s) code; technically the -l{name} flag tells the linker to link against lib{name}. So -lm links against libm, the c math library. 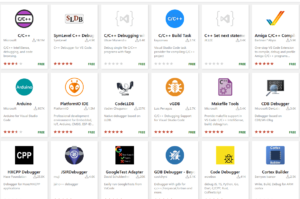 I was curious as to how many C extensions there are for VS Code. If you visit the marketplace (not a great name- all are free-some market!) in a browser, you can search through the (currently) 24,779 available extensions.

Finding C extensions is not easy. A search for C returns almost 16,000 results. C++  is a better thing to search on and gives 207 results, many of which are for C and C++. You can also search in VS Code but it’s easier in a web browser.

Even that’s probably too much but you can use the showing pull down to see how many extensions are in the various categories. If for instance you select Debuggers, then you will only see 18 extensions. 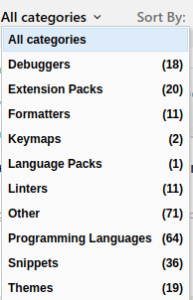 Note: As I’m still only my old creaky Ubuntu laptop, I had to use scrot for screen capture and gthumb for editing the image.  Note, the scrot project is looking for a programmer to look after it. Here is how to contribute to the project. 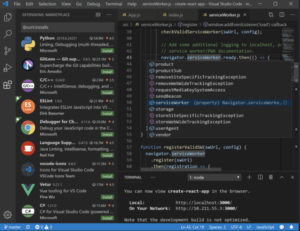 Seems to be with Visual Studio Code. I said yesterday that it had got into a funny state. Well I created a new VM and installed the Raspberry Pi OS that runs in a VM and after it updated tried installing VS Code on it.

It would have had the same problem had I let it. The problem is it when you install VS Code, it has some unmet dependencies and in fixing them it wants to remove 8 essential packages and this breaks apt which then gets in a funny state.

No one wants to see this scary message! So I think I may have to use the Code.headmelted.com version on Hyper-V for a while and see if this gets resolved with the next update of VS Code. Ah the jots of software development…

When I first started using it, the C++ extension, and configuring for C++, I got a tasks.json one which was suited for gcc, but recently when I install it, (and the C/C++ Extension for Visual Studio Code, the only choices seem to be these. What happened to the the ones for clang/gcc? The one on the right is what I’m expecting. Even with a C/C++ file open as the instructions here say, I’m getting the one on the left.

It’s possible that I’m getting this because I’m using the headmelted and VsCodium versions on a Raspberry Pi.

There’s a bit of a question mark about using the official extension on non-official build of Visual Studio. Headmelted allows it, but VsCodium has its own marketplace.

It’s easy enough to copy tasks.json over so not really a problem but just a minor irritation. 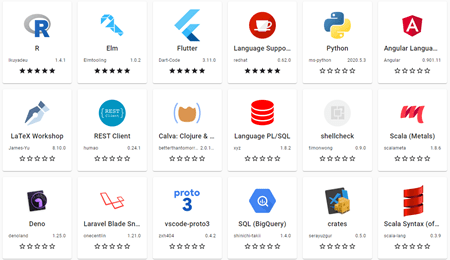 There are some subtle differences between it and Visual Studio Code. The main one is the not having access to the VisualStudio market place. The C/C++ template isn’t there but instead is installed by default.

However I have found that the tasks and launch json files created from the F1 menu don’t have the C++ choices. What this means is that you have to get them from an official Visual Studio source, like Visual Studio Code installed on 64-bit Windows/Ubuntu/Mac.

I’d already done this so I used WinSCP to send them via ssh from my Windows box to the Pi. It’s a slight irritation but once you’ve got them setup it works ok. I can build applications haven’t got debugging working yet though.

There is an alternate Extensions Marketplace which has 266 items in it.  That’s a screenshot of the programming language extensions. 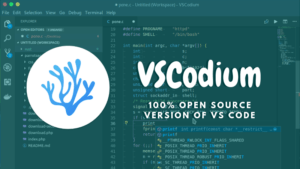 As they say “This is not a fork. This is a repository of scripts to automatically build Microsoft’s vscode repository into freely-licensed binaries with a community-driven default configuration.”

The Docs page provides info on how to copy JSON bindings from Visual Studio Code to VSCodium. I shall be giving this a try. Much as I like the code.headmelted.com Visual Studio Code, it doesn’t appear to be updated very often whereas VSCodium seems to be built every night.

Yes it is possible, as the screenshot shows. You can download a copy of Raspbian from Raspberry-pi. You can either download the .iso directly or save them a bit of bandwidth and do it via a file Torrent. It then takes about 15 minutes or so to install it. When you first run it, it will do an update.

It looks exactly like Raspbian on a PI but there are one or two little things to bear in mind. It’s 32-bit, the clipboard doesn’t seem to work and SSH by default is disabled. It’s real easy to enable it, just find Raspberry Pi Configuration. Click the Raspberry in a circle menu button at the top, then click Preferences and there it is on the menu that pops up. In the Interfaces tab, tick the Enabled checkbox for SSH.

I use the excellent WinSCP to connect to it. Conveniently the Pi will show you its ip address (or from a terminal run ifconfig and it will show you the ip address of eth0) and just put that in with username pi and your pi’s password which you should have changed when you set up Raspbian.

Finally you have to install Visual Studio Code and as usual, it’s not quite so easy. Most Linux distros these days are 64-bit and the official VS Code is only available for Debian in 64-bit and Raspbian is of course 32-bit. But there are community builds and it’s the same place that I got the ARM version from.

And here’s the result. A slightly sluggish (well it is under Hyper-V). I had to comment out the code that initialises the audio. Line 580 ish.

And here’s the results. 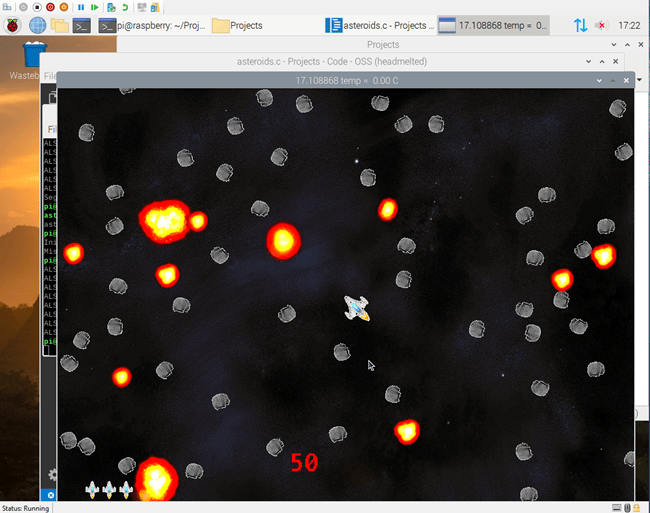 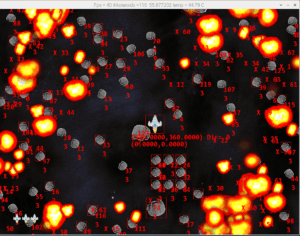 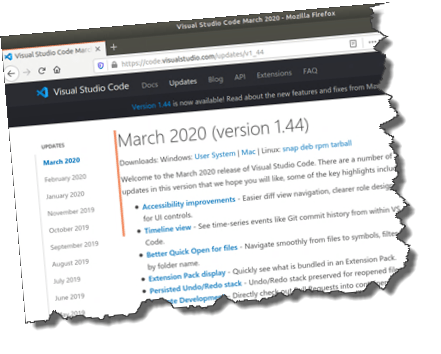 Normally I wouldn’t mention it, as there’s nothing really outstanding about the update (accessibility improvements, Timeline view, Better quick open for files etc.) You can read all about it here.

But the online documentation has improved and more importantly there’s a new tutorial using C++ on Linux. I could have done with this a few weeks back; everything there I had to figure out for myself! In our case I’ve used clang not gcc and C not C++ but those are very minor differences.

But it does have better explanations for many of the fields in the various .json files. Also the changes to tasks.json to allow multiple files. I just added them in based on gcc.