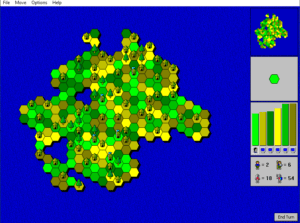 Slay is a commercial, albeit low cost game for Windows by Sean O’Connor.  It’s a convenient way to demonstrate game creation and in this and following tutorials I will show how to create a Slay clone- I call it Onslaught. It will be written in C + SDL2.

Onslaught uses the same hexagon map and unit structure as Slay. The game mechanics are as follows.

It’s a turn by turn game. Each turn, you get an income from each hexagon in every area that you own (an area being a contiguous group of hexagons all of your colour) that is free of trees or wasteland. You can use these points to buy new pieces or a castle and place them in an area.

There are four sizes of units (2, 6, 18 and 54) each 3x bigger. In combat a big unit destroys a smaller unit by being placed in its hexagon. You cannot put a unit in a hexagon occupied by a same size or bigger enemy units. Also only the 18 and 54 sized units can destroy a castle.

At the end of a turn any area that has units that exceed its support capability are destroyed and replaced by grave symbols. Next turn those hexagons if not occupied turn to wasteland. Support capability = count of hexagons in an area owned by the player plus reserve from previous turns. Each turn Reserve = Income – Cost of units + Previous reserve. It costs 10 to buy an army and 15 for a castle.

You do this by eliminating the computer players. In Slay there are six players. In Onslaught I’ll allow this to vary so between 3 and 8. When the total hexagons owned by one players exceeds by 3x the total amount of the remaining players (ie one players owns 75% or higher of the hexagons), the other players will offer surrender. The player can continue playing or accept victory.

In Slay there are several hundred pre-generated maps. In Onslaught all maps will generated. There will be several game play modes.

In Slay there are four levels of Artificial Intelligence with even the Very Clever toughest AI capable of making stupid moves, leaving areas vulnerable to splitting by moving one piece. I shall try to devise strategies to let the computer player play very well but also variably on a scale of 1-10 where 1 is feeble and 10 is supremely clever.

Some of the code will come from the Empire game (See AboutEmpire.zip on GitHub).