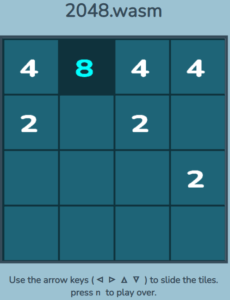 Back in 2014, an Italian developer called Gabriele Cirulli devised a puzzle game called 2048. It has been implemented on many platforms (I have it on my iPhone) and here is a link to a C version of it (in 300 lines) by developer Nishchith Shetty that plays it in a browser using WebAssembly.

WebAssembly is the technology that lets you run programs in many languages (including C and C++) in your browser at speeds up to 50% of native code.  It’s also used in Blazor where you can write C# programs that run in the browser.

To convert the C code to WebAssembly, you have to install a transpiler (a program that converts one programming language to another) called Emscripten, then it’s a single command line instruction to build the WebAssembly from the C sources and SDL2. Or you can just play it online here.

I’ve been meaning to do a WebAssembly version of my asteroids game using Emscripten. it’s just been sheer laziness that I haven’t got round to it.