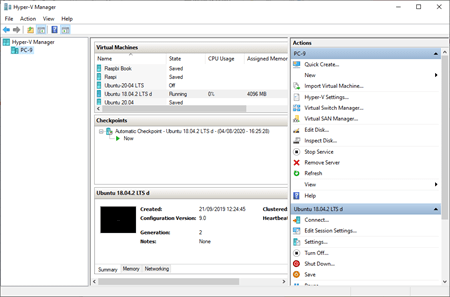 I’ve been using virtual machines for years. Originally I started with VirtualBox, the free VM manager from Oracle. I’m not sure why I switched to Hyper-V, about five or six years ago but I’ve been on Hyper-V since then. You need to be on Windows Pro and have at least 8 GB though the more RAM the better. I have 64 GB and the most I’ve ever had in use at one time is 29 GB. I always try to keep RAM use below 50% as there’s less disk swapping.

VMs are an excellent way to try out other Operating systems, install software and venture outside the comfort zone of a Windows PC and Windows 10.  Many of the screenshots published here in earlier posts have come from Ubuntu 18.04 LTS running in Hyper-V. It takes a minute to fire it up and connect then login.

I learnt to use Linux that way, both via the Ubuntu GUI and terminal commands and much of my 2nd Ebook has been tested on a Raspberry Pi OS running in a VM. Of course it lacks the hardware of the real Pi, so I have to test programs on both, but it’s quite a bit quicker doing a screen grab using the commercial Snagit on my Windows 10 PC.

I can do screen grabs on a PI using scrot, but then I have to upload the image using WinSCP or Putty. It’s not the end of the world but when you are doing a lot, having the image in the Snagit editor ready to copy/paste is a time saver. Also in a similar way, make sure you can do copy/paste via the clipboard and can resize the guest OS (as it’s called). It makes a difference.

I have mine configured so its uses RDP and you can just see the corner of the RDP bar in the Ubuntu image below where I’ve just launched Visual Studio Code. 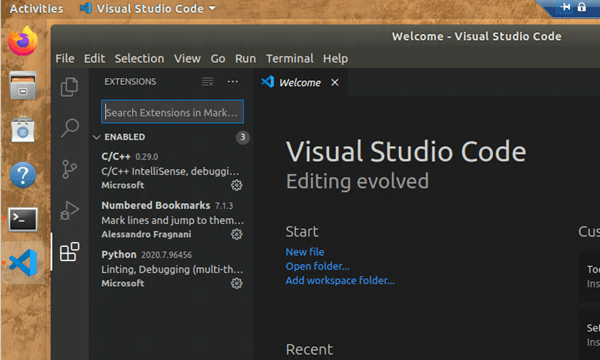 From a terminal I did ifconfig and got

This makes it very handy for testing network servers or if you do web development running a web server locally.