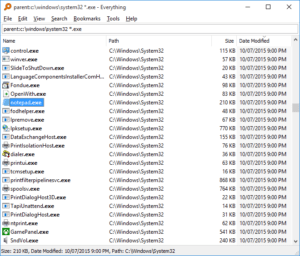 I’m currently operating on a Linux laptop as the M2 SSD on my new desktop PC decided to stop working the other day.  But I thought I’d mention a couple of utilities that I’ve recently started using.

My new PC, just three months old when working has a 1TB M2 SSD with Windows on it. Most software is installed here. All the data, backups, everything else is stored on a 10 TB Hard disk. This is my 10th PC since 1989 so it has the name PC10. Yes, original I know.

I have been copying everything I’ve created and written since 1989 and like a snowball rolling down a hill it has grown. When I finished copying everything from my old PC; a process that took a large chunk of four days, I’d used 2.3 TB out of the 10 TB hard disk.   I just copied across the Gigabit network connection and it maxxed out at 113 MB/S. That’s even with anti-virus running. Of course Windows has an overhead so sometimes the transfer speed drops down to KB/S for small files. I worked it out that over the 48 hours (4 days- 12 hours a day), it copied at 13 MB/S average.

In future it might make sense to zip up folders with small files in them. In the meantime I need to do a bit of pruning of files, removing duplicates etc.

I’d been looking for a utility to let me find files quickly and somebody had suggested Everything. It’s brilliant. It tells me that I have just over 4 million files. I can filter on document types, images, music files or just search on matching names. And it is very very fast. If you want to find the massive file that’s eating up disk space or duplicates, it does it. But it’s only for Windows. Lacking a Windows system at the mo, I’ve just borrowed the image from the Everything home page. 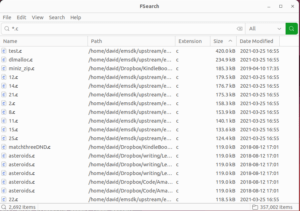 Developer Christian Boxdörfer also liked Everything and decided to create a Unix clone of it which is FSearch. And it’s written in C. That’s it on the left.

I set it to find all C files and sorted by size.

I’m quite keen on meta-sites. Those are sites that don’t provide information about sites, applications etc. but they provide ways to find it. I suppose another way to describe this would be to say a categorised search engine for open source.

A case in question is libhunt.com. It tracks mentions of open-source projects and software libraries. So for instance you might want to see the most popular C libraries in the last month or even games in C,

Of course you aren’t limited to C or games; there are other open source libraries to look for, or even by the number of GitHub stars.

Libhunt uses the mention of the project on Reddit as it’s source for finding things. So things can change from day to day or week to week.