I’m quite keen on meta-sites. Those are sites that don’t provide information about sites, applications etc. but they provide ways to find it. I suppose another way to describe this would be to say a categorised search engine for open source.

A case in question is libhunt.com. It tracks mentions of open-source projects and software libraries. So for instance you might want to see the most popular C libraries in the last month or even games in C,

Of course you aren’t limited to C or games; there are other open source libraries to look for, or even by the number of GitHub stars.

Libhunt uses the mention of the project on Reddit as it’s source for finding things. So things can change from day to day or week to week. 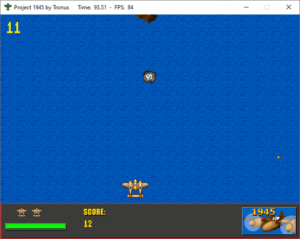 A university student by the pen name of Tronus has put a project from his 3rd year in his degree course on GitHub. The screenshot shows the game running on my PC. The build folder includes a release folder with game exe plus all dlls and game assets in a resources folder below that so you can run it immediately on Windows. ,

I vaguely remember playing a similar game (a vertical scroller) in arcades back in the 1980s. That game was 1942.

The 1945 game has been programmed in C and uses SDL2. As always I took a walk through the source just to compare how it was done say compared to my own efforts. One thing I noticed is that he uses a fixed delay of 11 milliseconds each frame in the game loop by calling SDL_delay(11) rather than setting up the video to sync to the fly back. Is this better or worse? I’m not sure.

I think I prefer my method in case something takes a bit longer. Having a fixed delay means that you could risk overrunning the 16.666 milliseconds allowed per frame. That could never happen with my asteroids game as syncing to the fly back means my game can take as long as 16.66 milliseconds per frame and still not overrun.