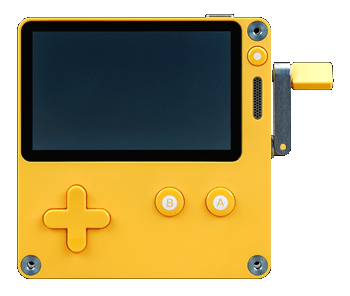 Back in May 2020 (nearly two years ago) it was originally announced and the updated release date now looks to be late 2022. Also it’s $179 not $149. But they have given a lot more details; you can for instance see the hardware spec.

Also more relevant is the way of creating games. Either in Lua + C or just C. The dev tools illustrated are running on a Mac but according to this Twitter thread (worth a read), they’re available for Windows, Mac and Linux.  The SDK looks impressive enough- “It includes helpful functions for things like font handling, drawing, animation, sprites, tilemaps, collision detection, A* pathfinding, audio synthesis, crank handling and more. You can download the SDK which includes a simulator now from the dev page..

Would I get one? I’m toying with the idea. A mono display of 400 x 200 is a bit retroish and my days of creating those types of games are probably long behind me, but it’s tempting.