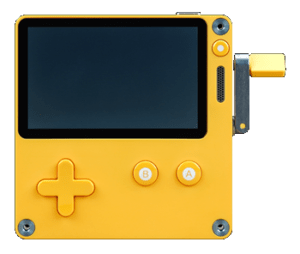 The reason I mention it is it runs games written in C (or Lua).  It also comes with 12 games. No mention of what’s inside it (RAM, CPU) though that’s described as ‘beefy’ but it has Wi-Fi, Bluetooth, USB-C, and a headphone jack.

That thing sticking out of the right is a hand crank. No, not for charging the battery but as a game input device. If you create a side-scroller game you can have it scroll one way by cranking in one direction and reverse it by cranking in the other way. Well that’s certainly original!

There will be a development kit available for it and you will be able to write programs for it though at the moment that looks as if its only on a Mac which is a bit of a shame. Oh I have a Mac but I much prefer my Windows PC or Ubuntu.

Compared to the massive screen sizes available on PCs, 400 x 240 sounds a bit small screen size. If you remember the CBM-64 from the 80s, it is exactly the same size as that screen and there were some great games out for it.

I’m excited about this because I believe it could be a renaissance for C Game programming.