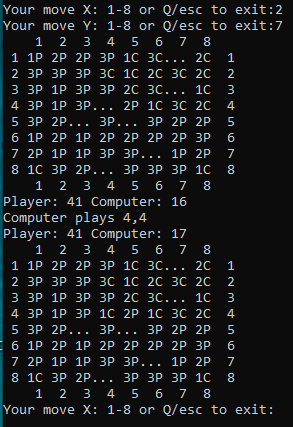 I fixed the bug in the Atoms game and the third tutorial finishes it off. The source code (in this case atoms3.c) has been placed on GitHub and the final version is about 300 lines long.

As well as the bug fix, I added a line to show the number of cells owned by the player and the computer. You can see it after the player move (Player : 41 Computer 16) and after the Computer move.

This whole atoms game was an experiment to see if I can introduce C programming without having to go overboard explaining every statement etc as I’ve done in the past. I think I’ll get back to programming games!