One of the understated and wrong assumptions about the Raspberry Pi is that you can try any flavour of Linux on it but Linux is really the only OS.  It is true that most of the 20+ OS 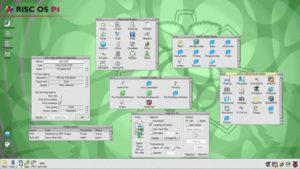 that you can try are based on Linux but there are a few that aren’t.

Of these, I think Risc OS looks the most interesting. It certainly isn’t Linux and it reminds me of the Archimedes, the first ARM computer.

Risc OS is 33 years old, it started in Cambridge in 1987 and is a descendant of the BBC Micro OS. And yes they do have a BBC BASIC available.  There’s  lot more background to it on this page  but bear in mind that it and the comments date back to 2012. It has an  ARM C compiler called Norcroft.

I won’t be oing any more with Risc OS, but thought it worth a mention. All of the stuff I’m doing will be on Linux OS.

Not. ARM is in the news because Apple have just announced that they will be transitioning from Intel CPUs to ARM over the next year or two.