In my previous post I mentioned about writing a program to determine how effective a riffle shuffle was. So here’s the code.

I’m using an array of 52 chars to hold the deck. I’m only interested in the card’s position in the deck so each card is initialised with a value in the range 0-51. I’m using three other similar sized arrays.

The program starts by picking up ( as a parameter) how many rounds you want it to run. It defaults to 10 if no value is input.

It then clears distances and inits cards. In each round, it starts by storing card positions in startPos. It then does seven riffles and works out how far a card has moved. If it has moved more than before (in distances) it stores it in distances.

DoRiffle works by indexing through the two 1/2 deck piles taking a card from each and a 50:50 random chance determines which of the two cards goes into the shuffled deck first and then second. 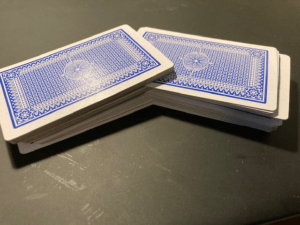