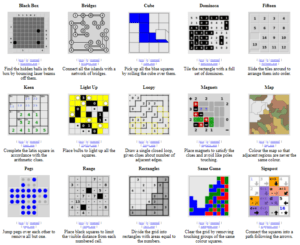 Those of you who have used the Putty utility to connect to a remote computer using SSH might recognise the name chiark. It’s also the home of various puzzles that are coded in C and they’ve made the source code available.  You can read about each puzzle via the online documentation.

The puzzles are one player games and run natively on Unix (GTK), on Windows, and on Mac OS X. As usual I’ve added these to the C code links as well. Puzzles are near enough to games to count! I’ve screen grabbed 15 of them but there are almost 40 in total.

If you like this sort of thing and have an idea for a game, take a look at the devel page. The puzzles are split into three parts, front, middle and back ends. If you want to implement a new front end (SDL2 anyone?) then you just change the front end.