Once you leave the relative safety of arrays and structs, the linked list using pointers is probably the next thing to consider.  Technically it’s a liked list of structs containing pointers. It’s like an array of structs only instead of allocating contiguous memory for an array, you allocate memory for each struct as you need it.

A double list has two pointers. One to the previous node and one to the next. As well as a head pointer you need a tail pointer and you can process the list from head to tail or tail to head (i.e. backwards).

Now the first operation you can do on a linked list is add a node to it.

To do this you

So when you are building a list you add each node to the head, in a sense pushing it in front of the others.

Anything that needs dynamic memory for example a text editor might use a double linked list to store all the text. Each line could be a different length. So each node would not only have a pointer to the next and previous nodes, it would have a pointer to the text in memory. When you insert a new line, you are just inserting a new node in the list at the current node that the cursor is on.

Or you might store a directed graph (a bit like in the picture) where each node has multiple pointers to other nodes.  Anyway I’ve published tutorial eight which looks at pointers and linked lists.

Once you ‘get’ pointers they are very easy to use. I think I always got them easily because long ago I used to do game programming in assembly language. When you are accessing blocks of ram indirectly through registers in assembly, then the concept of a pointer in C/C++ comes fairly naturally.

But really, all a pointer is, is a variable that holds an address. That address can be one of several things. It could be to a string of characters, an int or float variable, a struct, an array. In fact it can be anything that can exist in memory.

There are some limitations. It’s not good practice to use a pointer to access the underlying binary of your program, assuming that you can locate it. Plus chances are that code will be in memory that you cannot write to. Data however will let you write to it and pointers make your program far more flexible than without.

Tutorial six on pointers has been published. I’ll publish another one to follow it. 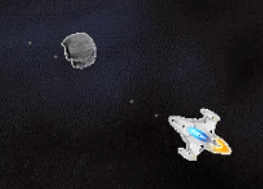 This bit is slightly controversial. I find all the * makes it harder to read code so I use typedefs to hide them. Here’s an example from the game. Try replacing every pbte with byte * and see if reading it is harder for you.

In my post about collision detection I mentioned getting mask bytes. This function GetMask returns a pointer to a byte (i.e. the first byte in a particular mask for a particular type of object (asteroid, bullet, player, alien) and for asteroids and the player a particular rotation. The many (pbyte) are needed because the arrays have different sizes. There are 24 player and asteroid masks.

You cannot be a C programmer without using pointers. It’s the one feature of the language that makes possible much of what you can do in C. Pointers seem to scare novice programmers and it’s true that you can crash a program if you make a mistake, but otherwise they’re not that bad. Pointers as parameters in functions let you change the value of an external variable.

A pointer is just a variable that holds the address of another variable. So here’s my take on pointers.

That ZeroInt() function is a long-winded way of setting whatever int variable it is called with to zero. Yes you can just do a = 0; but that misses the point. What if a was a struct and the ZeroInt was a function to initialise all the fields of the struct?