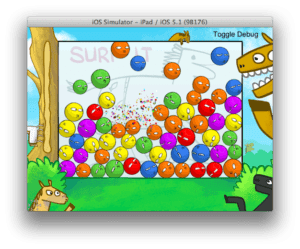 It’s not uncommon to have 2D games (and 3D) incorporate a physics engine. So when objects move and hit each other they behave realistically. The code that deals with “physical” interaction, objects bouncing or rolling off other objects is usually all parcelled up in a game physics engine.

Doing that means the programmer doesn’t have to worry about objects interacting. Your character moves into a room and knocks a vase; the vase falls over and breaks. Imagine how complex it would be if you had to program all the interactions. Instead, all objects in the room are predefined. As objects move and hit other objects they behave according to the predetermined rules. Balls drop to the floor and bounce. Breakable objects break.

An indie game studio called Tapir Games has put together a pretty comprehensive list of open source game physics engines. There’s even a couple in C though many are programmed in C++, C# and so on.

The picture comes from Chipmunk color match, one of the games using the (C library) Chipmunk physics library.