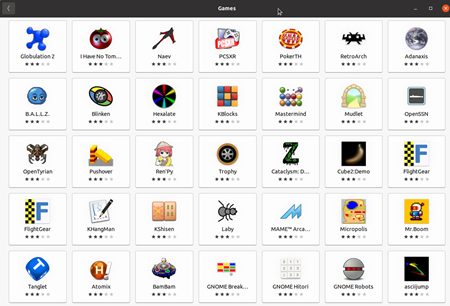 Don’t get me wrong, I like Linux. I’ve put in enough hours, especially on Raspberry Pi programming but games don’t seem to sell at all well on Linux. For one there’s a massive expectation of free software. Ubuntu comes with plenty of free games and some really good quality ones like 0Ad or Battle of Wesnoth.

The screenshot is from the Games category of the Ubuntu software installer. A very rough count suggests there’s over 420 games available there. Add to that emulators and ROMs (if you can get them) and you end up with almost 20,000 games.

I bought a Retro Pi at a Winter fair a couple of years ago and it came with 18,000 games. It was an Orange PI with a 16GB SD Card running the Retro Pie distribution which is available online. There’s no way the games are legal BTW, I even found four games that I wrote back in the mid 1980s running on the ZX Spectrum and CBM-64 emulators. All of the four games were smaller in size than the screenshot image! (Please don’t ask for a copy of the games. I gave them away with the Orange Pi to a nephew.)

If you are a Linux developer, how many games have you ever bought?

As this article on The Register explains “In the past year, Puppygames has sold 290 of its eight games on Linux and nearly 9,000 on Windows. ”

Most money I’d guess is made by companies producing AAA games especially on console.

So if you restrict yourself to developing games only for the Linux market then I imagine it would be very disheartening. However it’s not difficult to port them to Windows. Or you can look beyond desktop and venture into mobile development and web games. Both are considerably different to desktop games development and have their own problems (like getting your mobile app found when there’s a million others competing against it!). Or you can go down the “Write an ebook book about game development” as I have done.