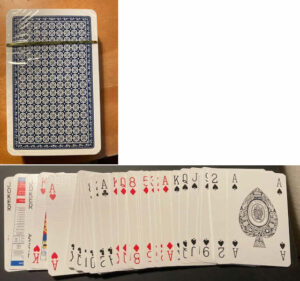 I first thought about this when I wrote the program to shuffle  deck of cards using a riffle shuffle. If you are given a deck of cards (or pack of cards as us Brits say), how do you discern just how shuffled the pack is? Can you calculate a numeric value for it say a % ranging from 0 to 100?

I believe it’s possible.  Here’s how.

I’ll write a C program to measure how shuffled a deck is and publish it in a day or two. Also here is a conversation on Reddit about shuffling cards.