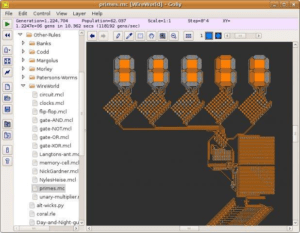 An English mathematician John Conway (who died not that long ago) came up with a very simple cellular automaton that he called Life. This was back in the 1970s and I remember finding his original article in Scientific American while at University.

We had no internet then and I whiled away 10 or so hours trying to make my version of Life run faster. Given that this was 1978 and it was written in BASIC, it’s not surprising that it only did a couple of generations per second on a mainframe. They didn’t give us much CPU time and it was an ICL 1900. My iPhone is probably more powerful!

The rules are simple enough to implement but it’s unlikely you’ll outperform Golly which is what the image shows. That’s written in C++ and has been under near continuous development for the last 15 years.

But part of the fun is writing your own life simulator and watching the patterns explode. I’d call it the minecraft of its day given the amount of computing time spent on this since the 1970s. There are some amazing creations all following these three simple rules.

The grid is just a simple bit field. Each cell is either on or off and the rules determine if new cells are created or if patterns die out.

There are innumerable ones on the web. Here for example is a C/SDL version. Note, it uses SDL1. When I get the time, I’ll build and run it. Comments are in French!