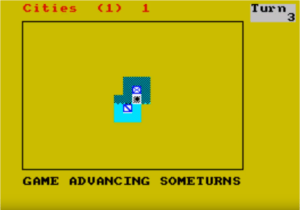 Part of the reason is SDL which is a wonderful library and whose potential I have barely touched. I used to be an 8-bit games developer back in the 1980s, writing games for CBM-64, ZX Spectrum, MSX and Amstrad CPC-464.

I wrote those games in Z80 and 6502 assembly language. Thee were no libraries, no frameworks, no debuggers (lots of print statements) and when I first started, I wrote the games on the machines themselves.  If you got a crash, the computer would hang or reset and everything had to be reloaded from tape usually.

C is a very simple language and SDL can shift pixels very rapidly. I wouldn’t necessarily choose C for 3D games but for 2D arcade games, I think C is nearly perfect. With SDL, once you learn how to initialise it, load graphics (from disk to GPU), blit shapes and flip the screen you are 90% of the way there.

That image was one of the games I wrote in 1987, an Empire “Conquer the shrouded world” game where you are playing against a computer player. There’s six minutes of gameplay on youtube.