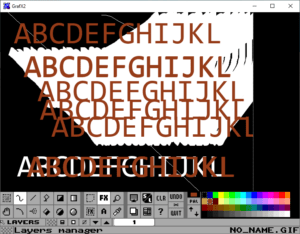 As the picture shows, no one has ever accused me of being artistic! Hey I can’t be good at everything (sometimes it feels like anything but it passes!) and I’ve long ago accepted that I never will be an artist.

But I can get by with graphics as I hope all the pictures on this site show. Either they are screenshots or comes from sites like pixabay.com and unsplash.com. Both are excellent sources of free images.

Sometimes though I have to do a lot of editing. MonoGame requires bitmaps for fonts. So I’ll take a free monospaced font and choose a size and create a sprite sheet from it.

But sometimes the tools I use are less than perfect. I never mastered or bought PhotoShop. Instead I used software like PhotoDraw 2 (from Microsoft in the early 2000s) or before that Macromedia Fireworks. But these are quite old and instead I’ve been looking around for something a bit newer.

There are quite a few open source graphics editors and if you look closely at my er artwork you can see at the bottom that this was taken from one such package called GrafX2. One reason for including it is that it’s coded in C and it reminds me of the granddaddy of drawing packages : Dpaint. As we’re talking over 30 years ago, I don’t know how many will remember it.