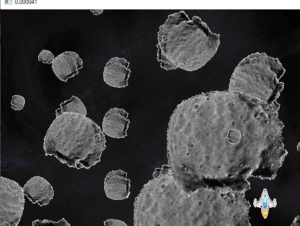 This is a screenshot of it as it stands and yes those asteroids are moving! It looks identical to the C version; the only difference is the code, not the appearance.

What makes it interesting is the structure. The Player and Asteroids classes both inherit from a Common base class that has all the position and move data.

It took a bit of time to get the overall architecture right. There’s a Game class which manages everything; the Player, Asteroid and Lib classes.  But Asteroids and Player classes also use the Lib class so  it took a bit of faffing around to make them all play happily together.

This is the biggest difference between C++ and C; the classes and how they all fit together. My biggest source of frustration has been arm wrestling with the C++ compiler; it sometimes seems as if never get easier! Sometimes a wrongly placed semicolon can generate hundreds of compile errors…

It took half a day to get it right and bullets should fit in much easier. Mind you I’ve had to incorporate two static variables in the Common class. One is a copy of the SDL renderer; this is needed to draw things on screen. The other is a pointer to the Game class so that I can access the DebugFlag state.  This is used to show debug information but I may be able to move the flag itself into the Common base class and change it through a call on a Player method. So long as it is static then changing it for the Player also changes it for the Asteroids and Bullets.