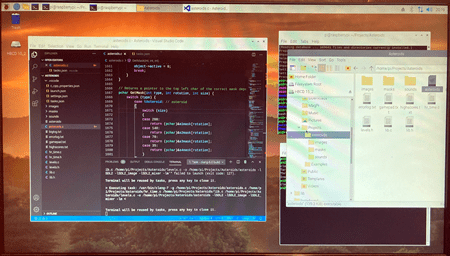 So it turned up and I setup things up similar to the 3B+. My interest was in seeing what frame rate it can manage compared to the 27 FPS that the 3B+ managed.

When I eventually got Clang, VS Code etc. installed and setup, compiled etc. it crashed just like it did on the 3B+ when first run. And again it failed to load the am2.msk file; I will really have to figure out what’s going on there. But also it would now not load the a1.png image. This is the one with the 24 x 280 x 280 asteroid images.

SDL provides a function SDL_GetError so I added that to the output when an image file fails to load. The error message that came back was Texture dimensions are limited to 4096×4096. Now this is weird for this Pi has 4 GB of RAM (the 3B+ has 1GB) and is outputting on the same 24″ monitor that the 3B+ used as well. Now it’s true that the a1.png file has dimensions of 6,720 x 64, so I can understand why that would cause grief but not why it worked on the 3B+. I suspect it has to do with RAM being allocated between the GPU and CPU so I’ll check that out.

I also installed Clang-6.0 to try that. On the Pi, installing clang defaults to Clang-7 (they changed the name so it no longer has a .0 on the end!). The release notes for Clang-7 suggested a possibility to do with abi incompatibility between Clang-7 and earlier versions. Bit of a longshot but I thought, that might explain the fail to load am2.msk file but no joy.

Well there’s nothing like juicy tender bugs to get my teeth into… the battle is on. 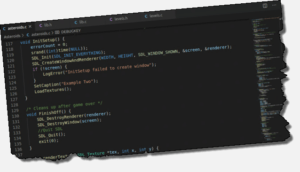