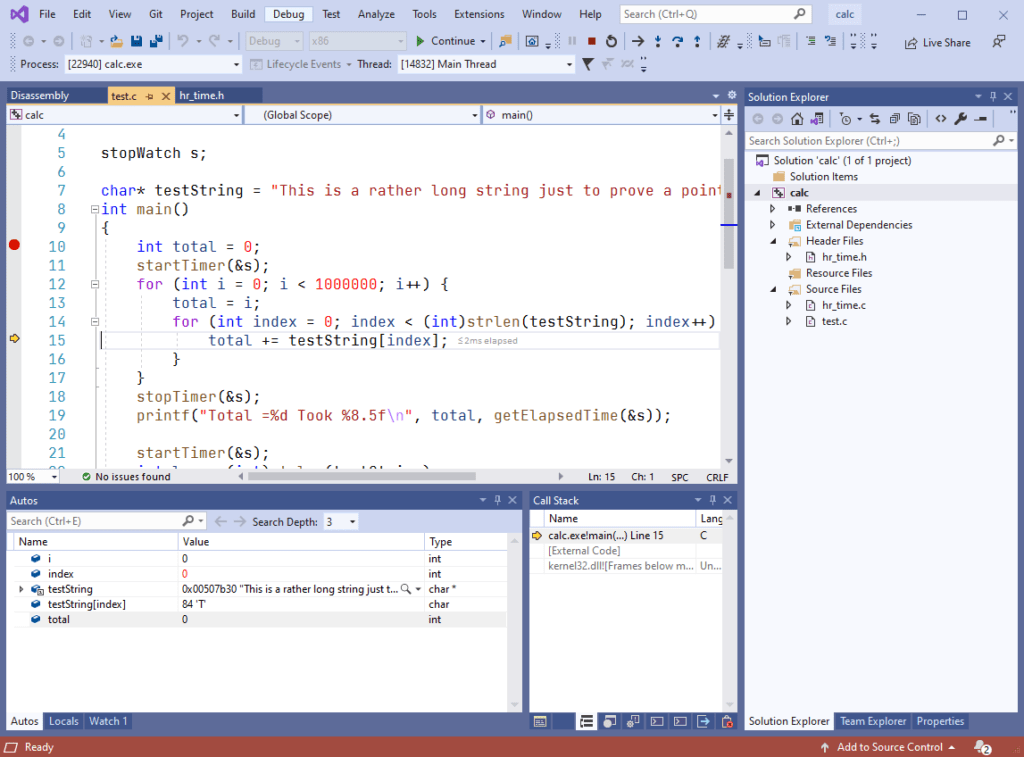 This is for C99 and later. Prior to this, in function you had to declare all the variables that would be used in that function before any code. Since C99, you can declare them nearer to where they are used.

This function is from the Asteroids game. The declaration of the two variables hx,hy could have been moved to just before the do-loop. They can’t be declared inside the do-loop because they are used after it.

This is one of those cases where it doesn’t really matter. But generally I will declare them close to where they are first used and I almost always declare the for-loop variable in the for-loop. Only if it’s needed afterwards do I declare it after, but that is a slightly iffy use unless you want to check the value it had when it exited the loop.

Remember the scope of the variable i.e. the part of the function in which the variable can be accessed starts just after it is declared. By keeping declarations near the code, you reduce the scope and this can help robustness.

All C code I write in the books is currently to the C99 standard. All the compilers involved (Visual C++ on Windows and Clang on Ubuntu) support C99 but C11 support seems restricted to GCC and Clang.

Microsoft has traditionally supported C++ but their C support seems a bit grudging; realistically they don’t prioritise it which I can understand.

Given though that I’m not going to republish my first e-book for a while (I’d like to add a WebAssembly chapter or two first), I’m going to investigate whether it’s worth switching to C11 for the 2nd book. From what I’ve read all it needs is a flag to tll it to compile to C11 standards. This is for Clang.

But the other question is what will I gain by doing this and I can’t actually see there’s that much benefit.. I don’t need Unicode, I don’t think alignment will really make much difference. You can read about the C11 changes on WikiChip.

So I’ve made the decision. I’ll stick with C99 for now. But for an alternative view, I recommend Danny Kalev’s 2012 article on C11.