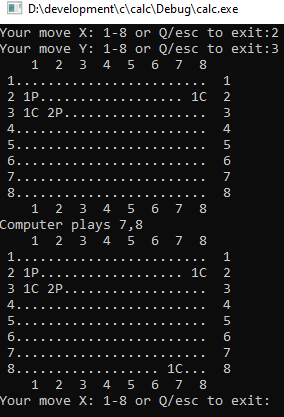 The first version of the program was 90 lines long but now it has grown to 275. This includes code to let the computer play and checking code plus I’ve refactored it a bit, simplifying the code.  I haven’t extensively tested it and at least one bug has crept in. Occasionally the computer seems to claim ownership of a player cell. This stops you adding one to that cell so its not good.

You are welcome to have a look at the code and fix it. I will in a few days. The code is on GitHub and is a single file atoms2.c. As before its been compiled with Visual Studio 2019 Community edition though it should compile more or less unchanged with gcc, clang etc. It runs in a terminal/command line. You can see the computer playing in the screenshot.

I’ve also added the tutorial for this.