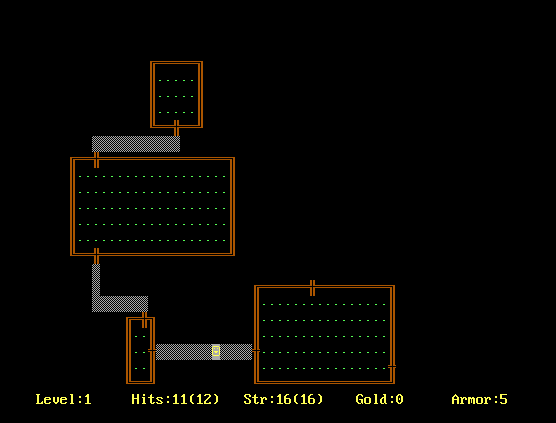 The internet archive (yes them again!) not only has archives of most things I’ve done, but they also have an archive of 7000 games from the Dos era that you can play in your browser. You don’t have to install anything, just click on it and it installs the DosBox emulator for the browser and runs it.

Thankfully they have provided a filter so you can search . Looking through the first page I spotted Rogue and Warlords II, two of my old favourites. The screenshot is me after just having bumped of an Emu. That white square in a corridor between the bottom two rooms.

The collection has loads of all classics; it’s a very nice bit of work. Games from this era (very roughly the 90s) tended to be 2D. It wasn’t until the mid 90s that 3D games like Quake and Doom appeared.

I did a search for Empire in the text box and it found Empire Deluxe (a game I have and occasionally play 27 years after I bought it) plus a load of other games like Master of Orion.

Back in the day I worked as a game designer for MicroProse (yes the Civilization people) from 1992-1993 and though I never met Sid Meier, i did cross swords (metaphorically) with the other cofounder Wild Bill Stealey at a company BBQ (in the UK) by er failing to catch a baseball.

Games back then still came on floppy disk. Installing a game from 18 disks was not a fun task….