I did a quick search for free rogue graphics yesterday and found an astonishing quantity of rogue type graphics in sizes varying from 8 x 8 (pixels), 10 x 10, 16 x 16, 32 x 32 and 64 x 64. I haven’t quantified these sizes exactly but the 16 x 16 ones seems to be the most frequent and so that’s what I’ll pick.  This post on Reddit provided links to many free (and some paid), most on the OpenGameArt website.

As a programmer sorting out graphics, it can be a very time consuming thing to do, so expect to spend a lot of time on it. You’ve got to satisfy yourself that you have enough graphics.  Not just for terrain (e.g. dungeons and cities) but also for monsters. There are artists who will draw you more on sites like fiverr.com but that’s all cost.  If you can draw or recolour then that’s a major plus.

Recolouring is another problem. With game graphics, you ideally want them all from the same source or else you’ll have the problem of mismatched sets. Nothing jars visually more than mixing graphics with different palettes. I’m no artist but even I can tell when something works and when it doesn’t.

Also there’s the question of perspective. The Dawnlike graphics are a sort of mix of from above but with a slant so you see front walls. Whereas something like the Kenney rogue game pack is front on. So you have to decide which you are going to go with.

My ideal game would be one of my favourites- Ultima 3. This is probably because its the only Ultima that I have played right through to the end and finished it! It was also the first. It took me about three months of one hour’s play a night. And I took copious notes. But as you can see its a bit more than a rouge like game! Those screenshots are from a CBM-64 which had a 320 x 200 screen (the image below is a composite of nine screens) borrowed from https://imgur.com/gallery/UvrzmBt. You can of course get the PC version sof Ultima III (and I and II) from gog.com.  (Note these are straight links not affiate. I receive nothing from them). I did buy Ultima I-VI from gog.com. 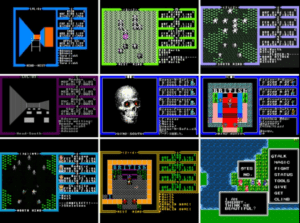