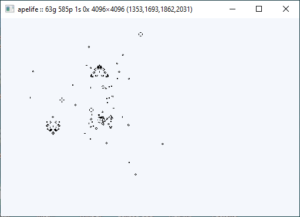 I’ve mentioned Life before, this is the cellular automata as discovered by John Horton Conway. It’s perhaps less of a game and more of a recreation for anyone fascinated by programming. It’s hard to add up how many man-hours have been spent on it.

Developer Justine Tunney (aka Jart on Github) has developed a portable Life called Apelife. Portable as in it can run on Windows (graphically) and Linux (Text User Interface). The application is a modest 112 KB in size and is one of the fastest I’ve seen. When you have a large area and gliders whizz across it, you know its fast.

She is also the author of Cosmopolitan C which Apelife uses.  It lets gcc outputs portable binaries that will run on every Linux distro in addition to Mac OS X, Windows NT, FreeBSD, OpenBSD, and NetBSD. It’s rather ingenious.