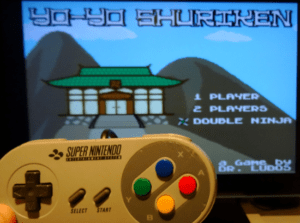 This isn’t about me for a change, but I thought it well worth a mention. For those who have never played with a SNES, it’s a Nintendo console from the early 90s. All the games were cartridge based and I loved games like Super Mario World, Legend of Zelda (I finished that) and Secret of Mana.

There are emulators around now’ I have one that runs on an Orange Pi (Chinese brand of Raspberry -Pi compatibles) and if you can get the SNES game roms (mostly illegal BTW!), you can play those games on it.

The reason I mention it, unlike older SNES games which were programmed in 65816 assembler, the developer (Dr Ludos) programmed it in C. Apparently there is only one C compiler that you can use called tcc816 and it needs PVSNESLIB. I’m not sure which of those two links has the better tcc816 though I suspect it’s PVSNESLIB.

This bloke also made his own cartridges which is pretty amazing. I used to know somebody who worked in a firm where they developed SNES games and apparently Nintendo’s quality control was such that the completed game had to include video of 27 hours of play to show that the game wouldn’t crash.  Given the cost of producing the thousands of cartridges, it’s understandable.

Cartridges stopped people copying them and had a higher profit margin, but its kind of ironic now that a 1,000 SNES games can easily fit on a minuscule SD card.