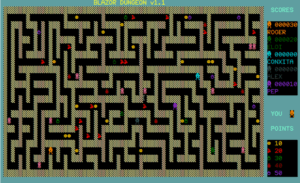 Web games have been largely Flash in the past though that took a nosedive in the ‘tens (2010 onwards) and Flash is officially no more as of 2021. The spirit lives on in JavaScript games and there are innumerable games in JavaScript. That said, I’ve never been that keen on JavaScript. I talked about Web games in a post back in December and particularly that I saw Blazor as a possible game platform.

Today though I discovered Awesome Blazor on GitHub and it includes 18 Blazor web games including a multiplayer dungeon which is shown (I think it looks like a bit Pacmanish personally) . Most of these are ASP .NET Core 3.1 (which became .NET 5 late last year).

Some games will use wasm (Web Assembly) while other use C# in a terminal. As a simple proof of concept but nicely done, have a look at the virtual train set online.  You can lay track and then run one or more trains along it. Impressive as a demonstration of what you can do with C# and Blazor in a browser.